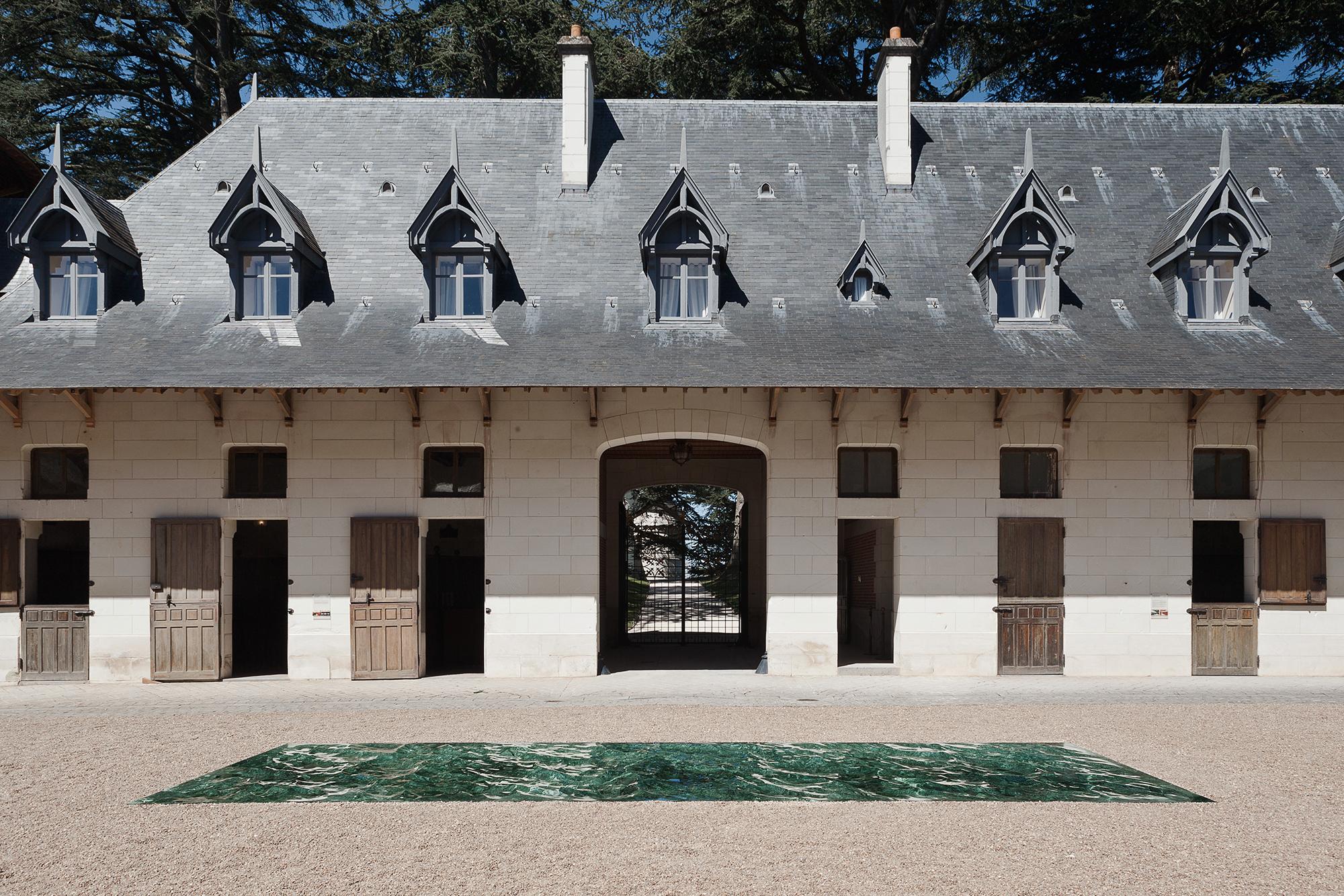 Mathieu Lehanneur has undertaken a delicate and meticulous color mapping, to pay homage to the subtlety of the colors of the ocean. Using high-definition satellite photography, the designer has selected fifty points throughout the earth to materialize them within large pieces of faience, which is a traditional artisanal glazed ceramic form, it is one of the denominations that various types of fine earthenware receive. , achieved with a clay-siliceous mixture, fired between 1000 °C and 1300 °C, which is later covered with opaque enamel mixing lead and tin. The artist carefully forms an aquatic relief and with the exact colors, they are glazed to reproduce the delicate nuances. Each screen is unique and suggests the geographical specificity of its environment.

Although most of the earth's surface is covered in water, we often only see a reduced, simplified impression of it. Endless color variations are enough

to reveal the specificities from blue to opal green or from black to almost dark grey. From the Caspian Sea to the Hudson Bay, from the China Sea to the Gulf of Mexico.

Under this perspective, Mathieu has come a long way carrying out different projects around the world. Some of them are mentioned below: 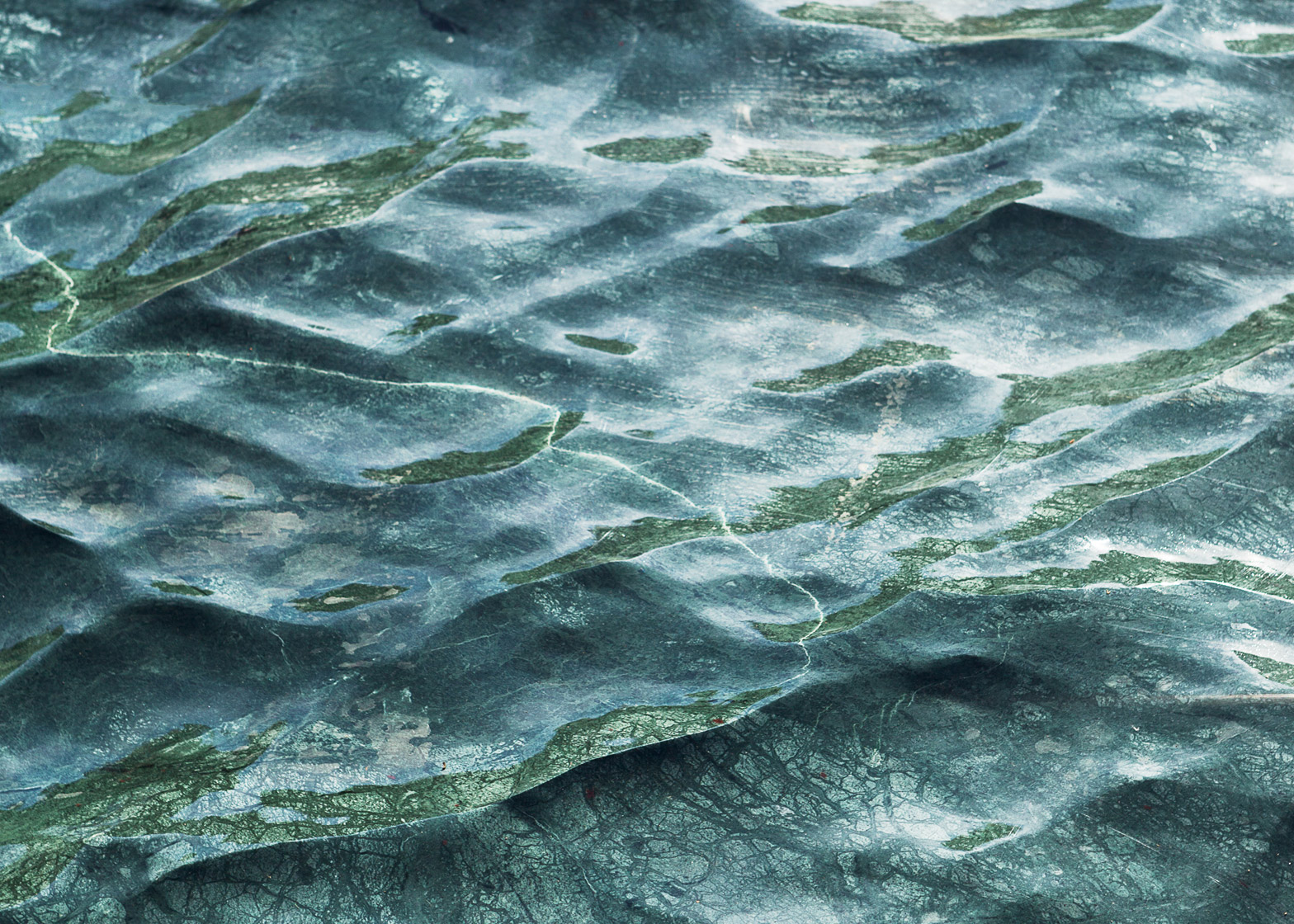 “I wanted to approach the garden with water as my muse. The water whose presence we perceive even before we see it for the first time under the Château, flowing uninterrupted towards the sea. Some say that the Loire is the last wild river in France; It shapes and nurtures the landscapes it traverses without stopping along the way.

Petite Loire is a frozen sea, the perpetual movement of the river trapped in a frozen and fossilized moment. A few dozen meters above the natural level of the river, Petite Loire cuts cleanly through the surface of the garden, digging into the ground to reveal a vertiginous and practicable fluvial relief in green marble“ Mathieu . 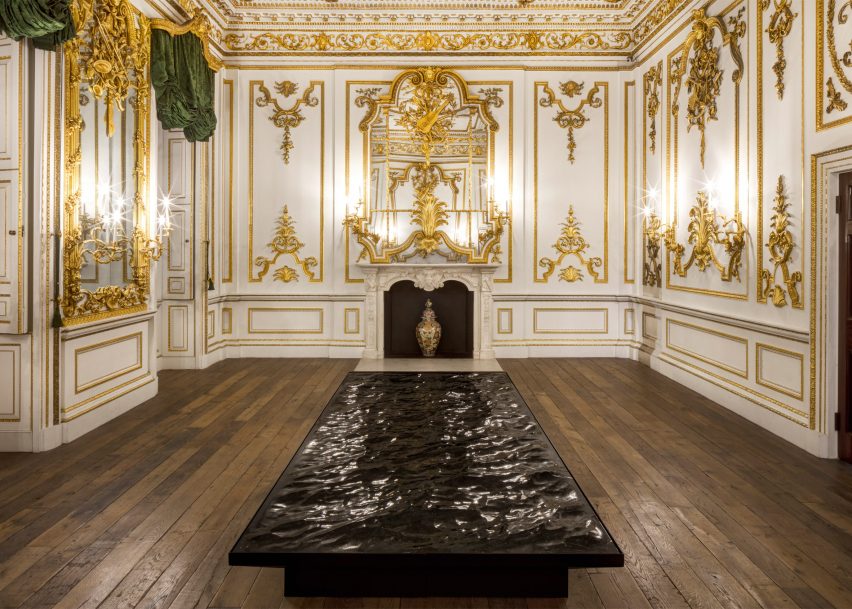 Liquid Marble is the surreal and materialized vision of the static sea in motion. Entirely made of polished black marble, the work perfectly reproduces the relief of water. The environment is reflected and distorted, and the intense black of the marble fascinates by the depth it offers when looking at it. Thus the "liquid marble" looks like a piece of ocean fossilized in stone.

"I like the contrast between the deep silence of Liquid Marble and the Norfolk House Music Room, whose lavish decor housed the most beautiful symphonies." Mathieu L. 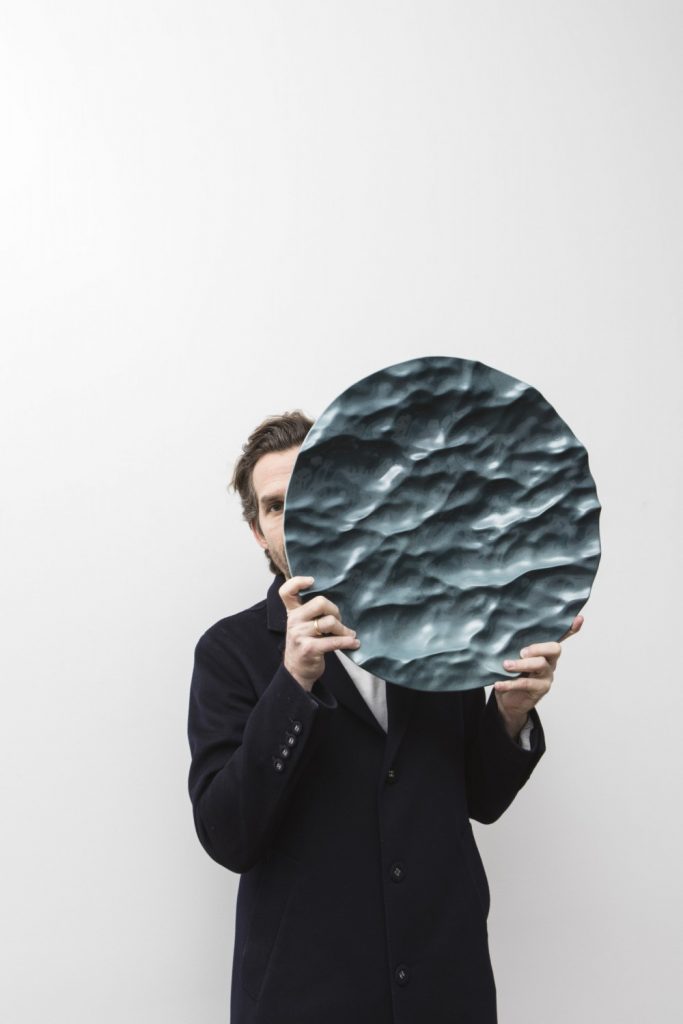 Lehanneur constantly surprises us with spectacular projects, his work defies traditional descriptions of design, science or art. The designer's passion and skill lie in exploring the natural and technical possibilities of an object to create designs that are functional, yet appeal to the physical and emotional senses.

Mathieu Lehanneur is described as the "champion of intellectual agility in the field of contemporary design" by Paola Antonelli, Senior Curator of MoMANY's Department of Architecture and Design. Mathieu Lehanneur's works are among some of the most famous public and private collections, including MoMA-NY and MoMA San Francisco, the Center Pompidou, and the Museum of Decorative Arts in Paris.

Mathieu Lehanneur has won numerous awards, including the 'Grand Prize' for creativity, awarded by the city of Paris, or the 'Best Invention Award' from the US magazine Popular Science for 'Andrea', an air filtration system of the house, created in association with Harvard University and based on studies carried out by NASA.

In 2009, the designer was invited to present his approach at the TED Global conference, and in 2012, Gestalten Editions published a book dedicated to his work. A retrospective exhibition of his work was held at the Grand Hornu – Center for Innovation and Design, in Belgium.

Lehanneur's latest news includes the interior design of the Maison Kitsuné store in New York; a series of limited edition “Ocean Memories” pieces edited by Carpenters Workshop Gallery; furniture collection edited by your brand; a temporary museum in Shanghai for Swiss luxury watch brand Audemars Piguet; his work Liquid Marble at the Victoria & Albert Museum in London; the interior design of Café Mollien in the Louvre Museum; the launch of a new concept of solar lighting furniture during the United Nations Conference on Climate Change at COP-21 in Paris.

He won the competition for the interior design of the Grand Palais in Paris, and is currently working on multiple projects such as a hybrid motor boat, a folding electric bicycle, interior design for hotels, shops and public spaces, such as technological and pharmaceutical design. .